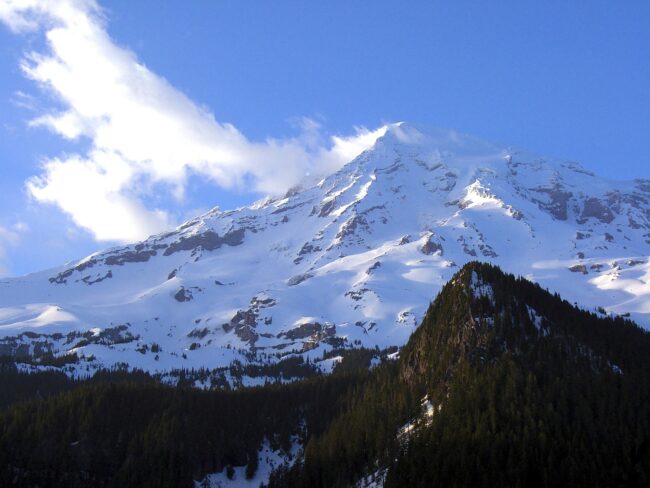 Very few know that Washington State is home to an active volcano, Mt. Rainier. A volcano is a mountain with the top of the mountain or surface of it open to periodically spew molten lava, ash, and other debris.

If you have ever been to Seattle or it’s surrounding areas, chances are you have seen Mt. Rainier in all it’s glory. It is, after all, a beautiful mountain. There is so much more to it though and if you are considering a visit, you should definitely check out this Mount Rainier National Park Guide to learn more about it before you go. Mt Ranier National Park is the most popular national park in the state of Washington (for the curious, Deception Pass State Park is the most popular state park in the state).

While you may not have know about it, Mount Rainier has had quite a bit of volcanic activity in the last century and a half.

The last recorded eruption of Mt. Rainier was in 1894 but eyewitness recorded accounts have said that there was also activity in 1882, 1879, 1870, and 1858. Mt. Rainier is considered to be a decade volcano, with expected activity due anytime with some just as recent as September 20th, 2009 and on November 7th, 2004. This activity consisted of small earthquakes and tremors beneath and around the base of Mt. Rainier but within a few hours, the tremors had dissipated and forgotten.

In comparison to the 1980 eruption of Mt. St. Helens, Mount Rainier is considered to be not likely to erupt but if it were to erupt, it would be expected to have an unprecedented amount of both property damage and loss of life. This is because of the valleys and caverns that lead right from Mt. Rainier directly into Pierce County.

Standing at 14,410 ft it has not erupted for over a hundred years and possibly has not had a major eruption in over 1,000 years. The real imminent danger of Mt. Rainier exploding is its landslides after doing so. Because of the shape of the mountain and the region, it points in mudslides that could reach over 60 M.P.H leaving little notice or warning for Washington State residents that have only moved in closer to the mountain in the last 30 years.

Even though scientists have predicted a 1 in 7 chance of Mt. Rainier exploding in our lifetimes, it does not mean that it’s a possibility that will never happen. The residents or Orting annually demonstrate an evacuation drill where they load into busses and cars within ten minutes.

For Washington State residents the best preparation advice would be to travel to higher ground to avoid the mudslides through the valleys and to prepare for mass amounts of ash to fall to the ground, protective facial equipment for breathing and clean water are key tools as well.

Where is Mount Rainier National Park?

Mount Rainier National Park is located in the Cascade Mountain Range, about 60 miles southest of Seattle. That makes it a perfect stop for those visiting Washington State or the Seattle, Puget Sound area. It’s only a few hours away from the Portland, Oregon area too, so it’s a great Pacific Northwest stop.

Mount Rainier spiking out at some 14400 ft., is the mammoth of the Cascade Mountain Range. It’s located pretty much in the center of the mountain range in Washington State, just north of the infamous volcano, Mount Saint Helen’s which is still active to this day.

On a clear day, this majestic masterpiece is not disappointing in any season, as most of the Seattle, and Puget Sound areas, have a view of it from their backyards or front yards.

Can You Camp Near Mount Rainier National Park?

Plenty of RV and camping spots dotting the whole Cascade Mountain Range, some parks are private, as well as state and federal sites that usually run a few bucks cheaper. However, the state and federal parks can get full pretty quickly during holiday weekends in the summer, so a little private park is something you might look out for.

Plenty of recreation as well, from fishing and water sports in the summer to skiing and snowmobiling in the winter. If ‘four wheelings’ is your fancy, there are plenty of riding trails for your 4×4’s, ATVs, and even motor-cross. Horse lovers bring your horses because there are a lot of equestrian trails as well.

Nice little mountain towns, nestled in tiny valleys, evergreen forest, as far as the eye can see. Watch out you just may see a Bigfoot, dash across the road.

In Mount Rainer National Park, you will get some spectacular up-and-close views that will leave you in awe. If traveling by car you can take a scenic drive around the mountain in probably half a day, and for travelers in Seattle or Portland, it would make a great day trip. As the sun sets on this one-of-a-kind creation, hues of orange, reds, pinks, purples, greens, shimmer of the western faces of this sheer colossus, standing domineeringly from everything around it.

This renowned mountain will leave anyone who loves the outdoors in awe. It is said that most climbers who want to climb Mt. Rainier require two to three days to reach the summit. For hikers, a 93-mile trail called the “Wonderland Trail” almost encircles the national park, and is a great way to experience the backcountry.

Many recreational opportunities await the traveler when coming to visit one of the creations most spectacular stratovolcano mountains.